A horde-mode car combat game where the recoil of your gun can make you fly.

It's just an exe, so it should work fine no matter what.

Hello! I've stumbled across this and might download, but I read the criticism below and I'm curious what changes have been made since then and what the state of the game is now :) Any feedback can drastically change whether I download this or not

Howdy! This project is currently not being worked on, and I don't think the build has been updated since that comment. Sorry my guy!

Ah that's too bad, I've been feeling like trying a car combat game out. Still downloaded it, it was pretty fun, but I can definitely tell where the other person was coming from. It's a little strange, yet oddly fun, to be able to fly around as a car by constantly shooting at the ground. I like how the enemy cars drive off when you die. Wish the shots fired upwards had the same affect, so it looks like I was shooting forward instead of up, but oh well :)

Glad ya had fun! I still want to finish it eventually but it'd take a bit of reworking. Thanks for the kind words!

No problem! It was a fun little game :) I'm interested in the genre right now as I'm currently working on my own racing/car combat game. I'm hoping to maybe upload it onto Itch.io once it's done. I know how projects can be left alone for a while with hopes of returning to them, I've done that countless times. Well, good luck on whatever you're currently focusing on

I realize this is just an early alpha, so I'm going to point out things that are almost certainly obvious to you, but it's healthy nontheless to hear these things from other people:

*Lacks rebindalbe keys
*The RMB attack is awfully underpowered considering how (relatively) tricky it is to pull off, compared to the LMB attack. I think it should also do something worthwhile when you jumb and shoot down, instead of the attack just farting out into nothingness.
*Needs sound. Hell, even old-school pc-speaker emulation sounds would actually fit it really well, although I realize I'm in the minority when it comes to that sort of stuff
*Wouldn't it be cool if you were sometimes actually approaching someone from behind, instead of all the enemies doing that to you?
*General variety is sorely lacking. Understandable, it's alpha after all, but I felt I had seen almost all there is to see after only few minutes of gameplay.

But you've got the aesthetic nailed down at least, and some very early framework for the game mechanics which can, and should, be expanded upon.

Thanks for the criticism! I have some questions:

*By the RMB attack being under-powered, do you mean the bullet you fire or the ground/side slam you do when you fire it?

*More variety is definitely something I'd like to have happen. What would you like to see? Different weapons? Customizable RMB attacks? More enemies varieties? Different playable characters? 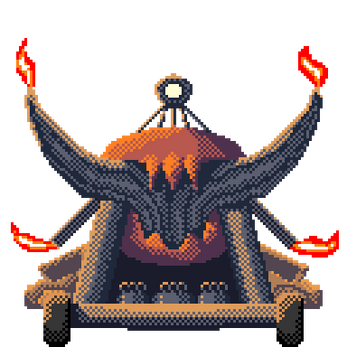